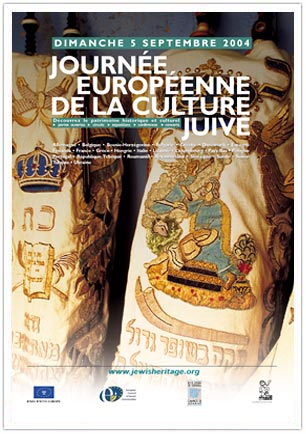 Across Europe, in 25 countries, the European Day of Jewish Culture (EDJC) has taken place on Sunday 5th of September 2004 in order to enable the public to discover the cultural and historical heritage of Judaism. Thanks to open doors, guided tours, exhibitions, lectures or concerts, the wider public was invited during one entire day to visit the synagogues, the cemeteries, the ritual baths or the ancient Jewish town quarters and to get to discover the place of education in Judaism. Following last year’s theme of “Judaism and the Arts”, this year, the coordinating partners of the EDJC chose “Judaism and Education”. This theme enabled a new approach to Jewish heritage where the transmission of religious teaching to all generations and communal and family life experience have crucial places.

Launched in 1996 in the Bas-Rhin (Alsace/France), under the Open Day formula by the Jewish association B'nai B'rith Hirschler in Strasbourg, in partnership with the Agence de Développement Touristique du Bas-Rhin, (Tourist board of Lower Alsace), the day was progressively extended and became the European Day of Jewish Culture in 2000. This year, for the fifth edition, the event was co-organised on the European level by three structures : B’nai B’rith Europe, the European Council of Jewish Communities and the Spanish Route of Judaism (Red de Juderias de Espana) and its success and growing appeal were confirmed. More than 500 activities organised in 300 cities across 25 countries gathered over an estimated 100 000 visitors.