20th Anniversary of the EDJC 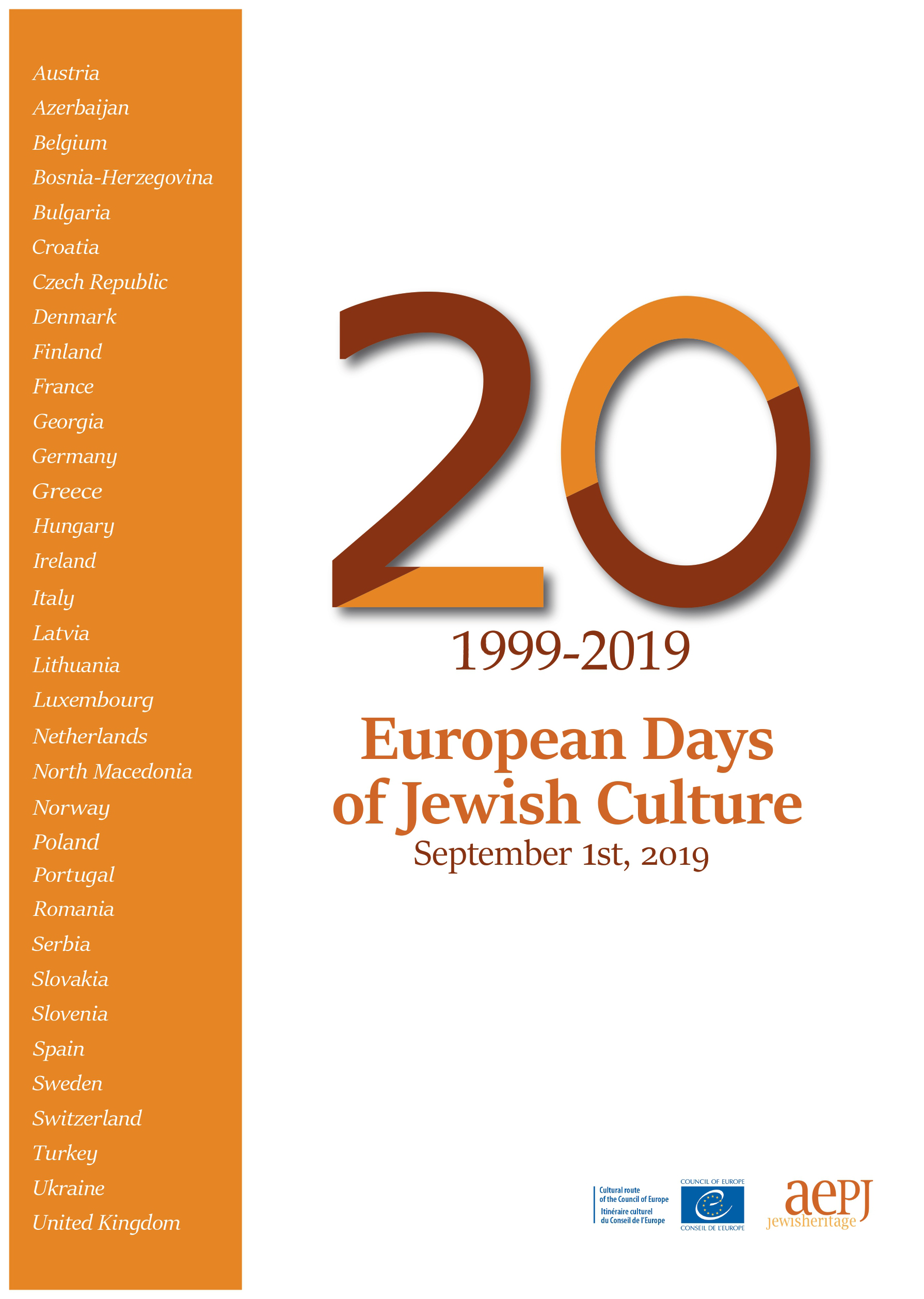 Save the date: European Days of Jewish Culture 2019

Date: Sunday September 1st, 2019. However, in several countries events and activities are being planned before and after this date.

20th Anniversary of the European Day of Jewish Culture

The theme chosen for this year's European Day of Jewish Culture's edition, is the 20th anniversary of the event itself. Due to this historical date, we believe that this should be the axis of this years EDJC.

The commemorations of the 20th Anniversary of the EDJC will take place throughout Europe from September, 1th 2019.

Twenty years ago, the European Days of Jewish Culture was born to combat collective forgetfulness and to dignify European Jewish heritage. This year celebrating its 20th edition, the fundamental objective of this European-wide event is to highlight the diversity and richness of Judaism, with the firm intention of promoting dialogue, recognition and exchange through conferences, concerts, performances, guided tours and other activities, which take place simultaneously throughout the continent.

We believe that this year's 20th edition is particularly important. Due to the rise of the extreme right in Europe, we are faced with a serious threat. In reaction to this rise of anti-Semitism, the EDJC acts as a strong defender of diversity and coexistence. We see the promotion of Jewish cultural heritage, and as it being an integral part of European history, as a key factor in the prevention of anti-Semitic stereotypes and prejudices taking root and increasing resilience against intolerance.

Today, more than one million Jews live in Europe. They are an integral part of multicultural Europe, active participants in almost all aspects of civic and public life in their countries. Jewish contributions to the arts and sciences continue unabated in Europe. However, the memory of the 20th century still persists, increasing the need for continuous tolerance and mutual understanding between Jewish communities and their neighbours.

Last year, more than 420 cities from 28 European countries joined the European Cultural Days Jewish, with the participation of more than 179,000 people. This program is coordinated by AEPJ, the European Association for the Preservation and Promotion of the Culture and the Jewish Heritage, with the collaboration of the National Library of Israel, and thanks to the initiatives and the ongoing work of municipalities, Jewish communities, museums and cultural centres throughout Europe.

In this years edition the graphic image and the title that will unite and give coherence to the EDJC will be the 20th anniversary, to which you can add your sub-subject proposal.

The date will be maintained, as usual, on the first Sunday of September, in this case, on September 1st. Of course, this date marks the kick off of the Day, but there is complete freedom to schedule on the dates you consider appropriate.

We hope that this proposal is valid for all, and that it creates a broad enough framework for all activity proposals to be included.