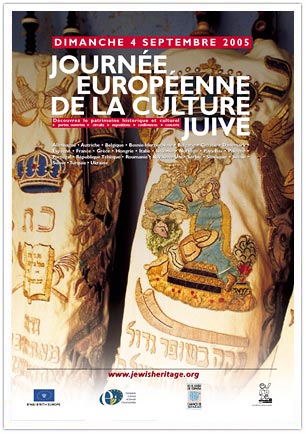 This year again, during its 6th edition, on Sunday 4th of September 2005, the European Day of Jewish Culture was a success. The figures speak for themselves: more than 800 activities organised in 260 cities across 26 countries gathered more than 120 000 visitors.

Over 10.000 volunteers and institutional persons were involved in the event in order to enable the public to discover the cultural and historical heritage of Judaism! Jewish associations, history groups, tourist boards, municipalities, museums, artists, students, all worked toward the preparation of the Day, while the official programme is being spread through the website www.jewisheritage.org, which was created for this purpose.

Beyond this extraordinary day devoted to the encounter with the public, the organisers wish to promote and help preserve the Jewish heritage, which is an integral part of Europe's cultural heritage. The creation of the European Route of Jewish Heritage is to be seen as a prolongation of the European Day of Jewish Culture. The Council of Europe will award the European Route of Jewish Heritage the certification of “Major Cultural Route of the Council of Europe” during a ceremony in Strasbourg, on the 5th of December 2005.

Meet you for the sixth edition of the European Day of Jewish Culture on Sunday 3rd of September 2006!