The European Routes of Jewish Heritage 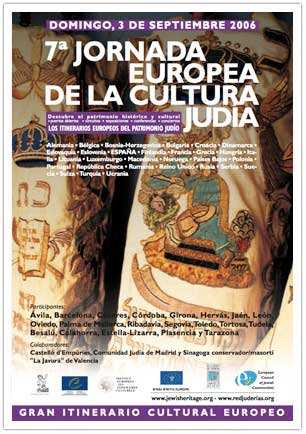 Again, this year, the 7th edition of the European Day of Jewish Culture which took place on Sunday 3rd of September 2006 was a success.

Every year its European dimension is increased, both by the higher number of participating countries and by the influx of the public. More than 150 000 visitors turned up! From the 16 participating countries which took part in the first year (2000), we have now gathered 30 countries this year (Belgium, Bosnia-Herzegovina, Bulgaria, Croatia, Czech Republic, Denmark, Finland, France, Germany, Greece, Hungary, Italy, Lithuania, Luxembourg, Macedonia, Netherlands, Norway, Poland, Portugal, Romania, Russia, Serbia, Slovakia, Slovenia, Spain, Sweden, Switzerland, Turkey, Ukraine and United Kingdom) including for the first time the Former Republic Yugoslav Republic Macedonia, Slovenia and Russia (Moscow and St Petersburg).

This growing success of the Day is the result of the continuous and thorough work of over 10.000 volunteers and institutional persons: Jewish organisations, historical groups, tourist boards, local councils, museums, artists, students… In some countries, the preparation of the Day has been formally structured and thus enable its pereniality around a national organisation or institutional structure. It is the case of Spain with Red de Juderias de España, a network of Spanish municipalities - which is also one of the three partner organisations of the project at a European level, in Italy with the Unione Comunita Ebraiche Italiane and in France with the organisation JECJ-France which was recently created and is composed of territorial communities, foundations, organisations and experts.

Thus, numerous activities were proposed to the visitors: more than 900 activities were organised in 300 cities. The theme of this year, “The European Routes of Jewish Heritage” enabled the visitors to discover the cultural and historical heritage of Judaism by travelling through space and time. Thanks to the organisation of bike hikes and walks, guided visits and open-doors, exhibitions and lectures, documentaries, concerts, tasting and many other activities, historical, artistic, and/or gastronomic routes were highlighted.

Visitors were invited to retrace the life of well-known people (including Sarah Bernhardt in Paris, Rabbi Kahn in Germany, the Godchaux family in Luxembourg…), the history of a community (Loun in the Czech Republic, Budapest and Baja in Hungary, Zagreb in Croatia, Pancevo in Serbia…), the migrations of another (the Russian Jews in Geneva in Switzerland, the Spanish Sephardim Jews towards Thessaloniki in Greece, the Danish Jews who came from Northern Germany…). In some countries, the Day was the occasion to commemorate an important date for the local Jewish community; hence the celebration of the 350th anniversary of the resettlement of the Jews in Great-Britain, the celebration of the 100th anniversary of Helsinki synagogue in Finland. The public was also given the opportunity to discover Klezmer (in Norway, in Romania…) and Sefarady music (in Bosnia-Herzegovina, in Spain, in Macedonia, in Slovenia…), to highlight the traces of the architectural and artistic heritage which were left by the communities throughout the centuries (the roots and routes of the Dutch Jews, the heritage of Kosice, Presov and Bardejov in Slovakia, the Jewish roads in Bulgaria, the heritage of the province of Antwerp in Belgium, of the Lvov region in Ukraine…) or to discover the wooden synagogues of Lithuania, the old Jewish cemetery of Gothenburg in Sweden, the Spanish Jewish quarters, the Italian synagogues…

Beyond this extraordinary day devoted to the encounter with the public, the choice of this theme contributed to the development of the European Routes of Jewish Heritage which received in December 2005 the diploma of Grand Cultural Route of the Council of Europe. The identification of routes which already exist and the creation of new routes at a cross border, national and local level, will have enabled a first overview of Route which is being elaborated.

Meet you next year for the eighth edition of the European Day of Jewish Culture!