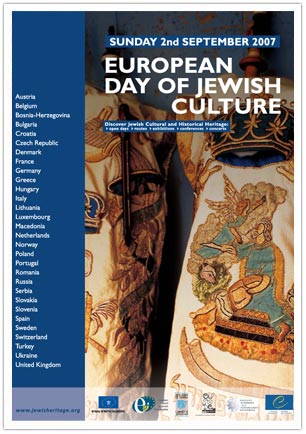 Mrs. Claude Bloch, chairwoman of the AEPJ during 2007, outlines the importance, as well as the success, of this celebration:

As in former years, this report offers you a general survey of the different activities which have taken place during 2007 on occasion of the European Day of Jewish Culture.

We specially wish to point out the steadily increasing success of this day. Just as during the past years, the number of visitors has continued to grow, up to a total of 200.000 persons between the 30 countries.

We can confidently, and with certain pride, affirm that our programme has achieved durability and it is now firmly established within the European cultural panorama. The EDJC is generally considered a marvellous opportunity to get an access to Judaism and to knowledge of the other. It is the kind of event that helps to promote the European ideal of comprehension and tolerance amongst our youth.

While all the activities which have taken place were on such a high level of quality as has been remarked on by all visitors who have left their commentary, I would like to pick up some of the highlights of the event, even if it cannot be done in too exhaustive a way. To start with, let me take a look at the different interpretations given to the subject which has been chosen, and which has enabled to encompass activities of a very diverse, as well as symbolic kind.

Thus, the United Kingdom could refer to 350 years of Jewish presence, whereas Turkey, even though considered a Muslim country, had been able to open up its great synagogue in all its serenity. On the other hand, Poland, an eminently Catholic country, had decided to promote its Jewish culture, while Berlin had opened the doors of its synagogue on September 2nd, even though it had barely been inaugurated the day before!

The city of Antwerp had organized its own itinerary, and as to the rest, there had been so many other events and initiatives in the numerous countries and cities that it is impossible for me to mention them all in this introduction. You will find all the details on the following pages of this report.

The important and definite position of our EDJC within the whole of cultural activities carried on in Europe has been illustrated in a way that has touched me very much personally, since I have had the privilege to represent the Jewish Heritage during the celebrations of the 20th anniversary of the Jacobean Route, in Puy-en-Velay and Santiago de Compostela, invited by the Council of Europe.

But beyond my own person, it were all the contributors and promoters of the EDJC who had thus been acknowledged as belonging to a European community who works in a positive way towards the conservation of cultures, the comprehension of others and tolerance.

We can only hope that this spirit is maintained and will prevail those contrary forces which unfortunately are still strong in our days. This is the wish I make on this occasion.