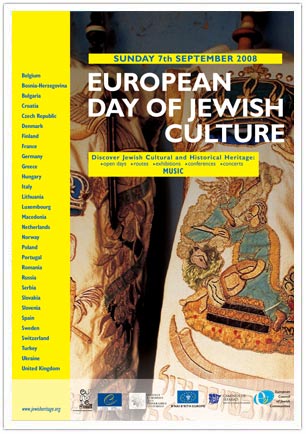 The 9th edition of the European Day of Jewish Culture will be held on Sunday, September 7th 2008. The subject matter chosen for this year is "Music", inviting the public to discover the place of song and music in Judaism, as well as the cultural diversity characteristic of Jewish music, or the Jewish contribution to the world of music.

Music has always played an important part in Jewish culture; ever since Biblical times the Jewish people have expressed themselves through songs which transmitted the history of kings and prophets, of struggles and dreams, from generation to generation.

Liturgical music (or 'chazzanu't) as well as secular folk music, popular songs and dances are an indelible part of the Jewish heritage. Jewish music can actually be both religious and secular; it depends on its contents and its function (religious, ceremonial, stage arts). It gives rhythm to the melody of rituals in the guise of certain chants and prayers. The cantor, or 'chazzan', leads the prayer service at the places of cult. He accomplishes a musical, vocal and liturgical function by means of traditional melodies and chants.

Moreover, Jewish music which is both popular and religious is performed at certain events of different stages of life, such as marriages or bar mitzvahs.

And finally, Jewish music accompanies traditional texts as well as folk dances and theatrical performances of the different Jewish communities during their pilgrimage. It encompasses all forms of music, classic and popular, instrumental and vocal.

Jewish music also is marked by its cultural diversity. This is mostly the result of musical elements being taken on from other people and cultures, and then being adapted to the taste of Jewish artists and their Jewish values.

The three major currents of Jewish music are:

In short, the Jewish contribution to the world of music has been very important, starting with classical music, which has been marked by internationally renowned Jewish composers, musicians and directors. We could cite, for instance, J.Fromental Lévy Halévy and Jacques Offenbach, who had been famous composers of the 19th century, or the great musician Arnold Schoenberg. It also has to be remembered that the libretto writer Lorenzo da Ponte, who wrote some of the librettos to the operas of Mozart, such as "Le Nozze di Figaro" (1786), was the son of a Jewish tailor.

On the other hand, several composers, even though not Jewish, have let themselves be inspired by Jewish music, as is the case of Dimitri Shostakovich, the Russian composer of the 20th century, whose work takes up elements of Klezmer music.

In short, the European Day of Jewish Culture this year will be an occasion to discover the wealth of Jewish music through numerous events and activities of all kinds.