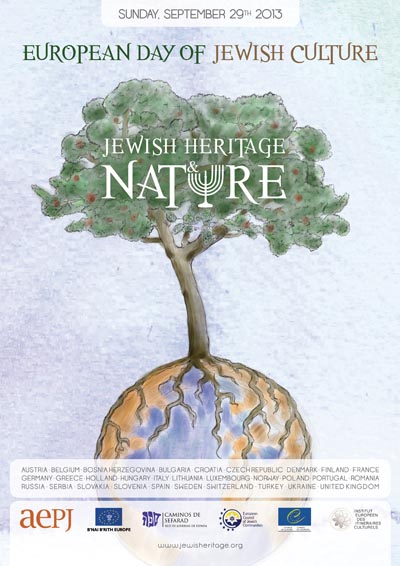 The theme of this year's European Day of Jewish Culture is Jewish Heritage - Judaism and Nature. This topic gives us food for thought - is there a link, and if yes what is it between these categories, what is the interaction between them? In order to find the answers to these questions it is necessary to look for arguments and examples and define a concept for the link between them. Here is a glimpse into this extremely complex topic.

Judaism is a monotheistic religion; it is also philosophical in nature, because it contains the main postulate, described in the Pentateuch – the Torah on the lifestyle of the Jewish people; the sacred relation between God and the Children of Israel.

The term “Judaism” stems from the Greek word “Judaismus”. It appeared in Jewish-Hellenic literature towards the end of 1st century BC as an antithesis of pagan beliefs, manifested in polytheism and idolatry. It is worldwide accepted that Judaism is the oldest monotheistic religion.

Even though the Jewish religion is clear, monolithic, it is also multifaceted because it concerns first and foremost God, but also the universe and humanity. The numerous Jews are united thanks to Judaism as a religion, but also thanks to the attitude towards humanity inspired by the religion, and the Judaistic creed for the relations between different people as indicated in the principles of the Testament. These priority milestones in the faith generate harmonious coordination between God and His people within the Jewish communities. This is clearly stated in God’s Commandments, accepted by the Jews, which should be valid for people all over the world. The Jewish lifestyle is subject to the idea of various cyclical practices, of unconditional adoption of the Jewish sacred days, the Jewish calendar and the observance of the Jewish ethical laws and sanctity of traditions. Believing in Judaism requires adopting the universality of Jewish prayers and teachings so that every person who identifies themselves as a Jew should accept the basic features of this religion that is an indelible part of the centuries-old history of the Jewish people. After Judaism appeared the new concept of a single God was created. He is the creator and ruler of the universe.

Judaism has developed along with a fierce struggle with the inherited attitudes towards polytheism and influences of neighboring countries, exerted by the peoples around the Jewish people. After Moses received on Mount Sinai the Ten Commandments, inscribed on stone tablets, these acquired the virtue of a moral code for all people and Judaism is categorized as an ethical religion. So Jews not only worship God, but have also acquired humane directives, where it is indicated how one should treat another person, animals, plants and nature in general. Thus the monotheistic religion of Jews is formulated as an ethical monotheism. The main postulate in Judaism the world has been created by God. If the Creator of the universe and all in it is made by God, then the question of His relations with His creatures, nature among those, arises. Nature goes beyond a mere collection. It bears the stamp of the act of God; men, plants and animals were created by Him and this is in absolute confirmation of the existence and the obligatory relation between the Creator and His creations.

Animals are also a result of the blessing of God. Judaism teaches us that one must enjoy the beauty of nature and express that joy through prayer. God must be praised for the fragrant flowers, the trees, the grass, fruit, and animals. When seeing the miracles of nature, such as a lightning, the sunrise, falling stars, thunders, rainbows, the mesmerizing effect of flower blossoms, one should say a blessing. Judaism is full of evidences about the Jews’ relation to nature, especially with the land, in particular the land in Israel. Nature, whether it be trees, fruit and vegetables, animal products, during the change of seasons and the transition from one agricultural cycle to another, is a recurrent element, like traditions and rituals, for the celebration of Jewish feasts (Hagim). This blending between nature and traditional rites, typical for Jewish religious and secular feasts, is yet evidence that in Judaism nature, as God’s creation, has a place in the lives of Jews.

Jewish feasts are marked as special days in the Jewish calendar:

There are special rituals related to nature to be performed according to Jewish religion. They consist of prayers and acts.

A significant feature of Judaism is the ethical treatment of animals. At the same time God allows people to eat animals, but protects the latter against brutal killing and instructs that the procedure be as gentle, fast and efficient as possible. According to Judaism animals can be used for other tasks as well, such that are difficult for men but necessary for their living. Restrictions to the use of animals for various types of labor are imposed based on the ban to treat them brutally. Animals must not be beaten, forced, made to do labor unnatural for them, made to work night and day without rest, and must not be left without food or water.

Regardless of the strict restrictions laid out in the Torah, the humane nature of Judaism breaks certain bans; for instance if an animal is drowning, according to the rules in the Talmud, one is allowed not to observe the restrictions of Shabbat in order to save the animal from death.

We, the Israelites, were ordered to love God, because God is real, it is the path to a righteous life and we should do our utmost to follow God’s laws. The role of man in the maintaining, preserving and improving what God has created is not indicated. In today’s world threatened by natural disasters, outside of religion, man’s (Homo sapiens’) role is to preserve what the Creator has made, in the harmony that He has established.