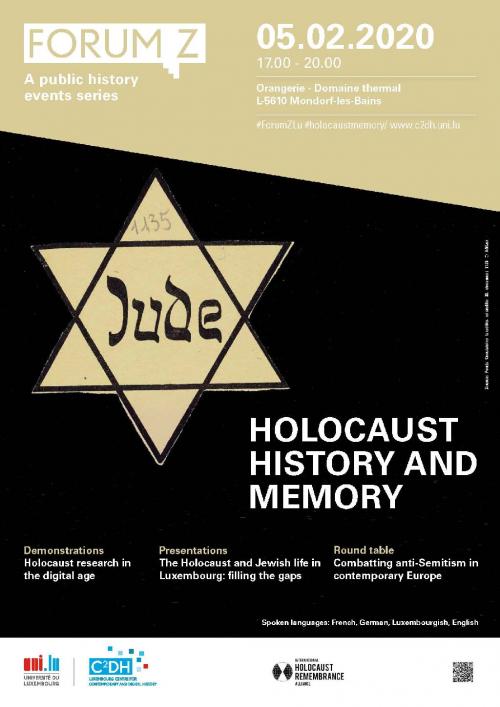 On the 5th of February, EHRI will be present at the ForumZ event Holocaust History and Memory, organised by the Luxembourg Centre for Contemporary and Digital History (C²DH). ForumZ (Z for Zeitgeschichte, contemporary history) is a public platform for a critical and open discussion of current issues in contemporary Luxembourgish and European history. Interested citizens are invited to debate with experts about selected (society-related) topics, new approaches and new sources in contemporary history. ForumZ as well as EHRI are both engaged in bringing history beyond the university walls and into the public sphere.

Adina Babes, who works for EHRI at Belgian partner institute CegeSoma, will demonstrate some of EHRI's resources during the first part of the event Holocaust research in the digital age. She can als anwer questions about the EHRI project. She will be joined by colleagues from many other interestsing projects or institutions related to the Holocaust. The second part of the event is dedicated to short presentations and a round-table discussion will conclude the day.

Holocaust History and Memory is organised at the Orangerie - Domaine Thermal Mondorf at Mondorf-les-Bains.

Entrance is free, but registration is appreciated.

The event will involve three different parts: presentations, demonstrations and a round table discussion.

1. The Holocaust and Jewish life in Luxembourg: filling the gaps

2. Holocaust research in the digital age

The second part of the event offers the opportunity to learn more about new possibilities and methodologies for Holocaust research. Visitors can walk around a series of work stations featuring the following project demonstrations: Arolsen Archives, presented by Christiane Weber European Holocaust Research Infrastructure (EHRI), presented by Adina Babes-Fruchter Database of 3.100 foreign Jews in Luxembourg in 1940: statistical exploitation, graphs, maps, visualisations, presented by Marc Gloden and Robert Besa (C²DH) Iwalk (Jewish community in Esch and Luxembourg), presented by Jakub Bronec (C²DH) Digitised private archives of the Harf Family (1940-1947) as part of a website project about the Jewish community in Luxembourg, presented by Georges Büchler (C²DH)

What is the state of anti-Semitism in Europe, and Luxembourg, today? How can it be situated within the broader context of rising hate speech and crime, online and offline? What methods are being proposed to combat it? How does it relate to politics and the broader memory battles that are being fought in Europe today? These will be the themes addressed during a round table discussion with the following participants: Dr. Gerben Zaagsma (moderator, C²DH) Georges Santer (Ambassador, Chair of the International Holocaust Remembrance Alliance/IHRA) Prof. David Feldman (Director, Pears Institute for the Study of Antisemitism, Birkbeck, University of London) François Moyse (Chair, European Association for the Preservation and Promotion of Jewish Culture and Heritage) Languages spoken: French, German, Luxembourgish, English Refreshments will be served. Organised in collaboration with the International Holocaust Remembrance Alliance (IHRA).

For more information and registration, visit the ForumZ website.