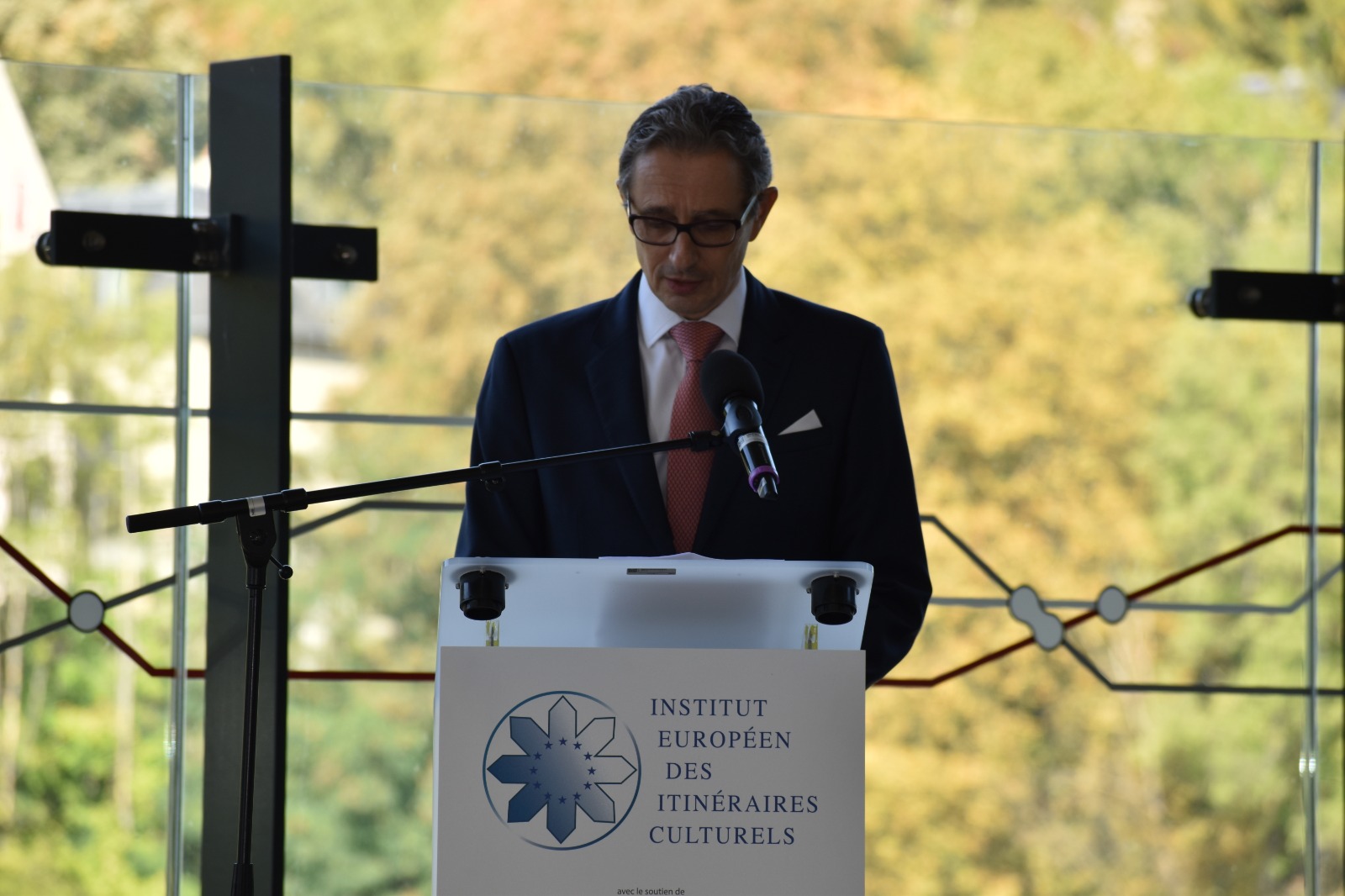 Between 17 September and 17 November 2020, an exhibition on "The Cultural Routes of the Council of Europe in Luxembourg" will take place at Hall du Funiculaire, Middle Station, Pfaffenthal (Luxembourg). The exhibition is organised by the European Institute of Cultural Routes (EICR), with the support of the Ministry of Culture of the Grand Duchy of Luxembourg and the Luxembourg National Railway Company (CFL).

The opening ceremony of the exhibition showcasing the Cultural Routes of the Council of Europe crossing Luxembourg took place on 17 September 2020, with every respect for the sanitary protective measures related to COVID-19. Opening speeches were delivered by Mr. François Moyse, President of the AEPJ, Mrs. Tanson, Minister of Culture of Luxembourg, Mrs. Samardzic-Markovic, Director General of Democracy of the Council of Europe and Mr. Biever, President of the European Institute of Cultural Routes.

The exhibition presents the Cultural Routes of the Council of Europe crossing Luxembourg and invites visitors to discover different sites of Luxembourg's cultural heritage from a European perspective, bearing witness to our common cultural heritage.


Speech at the opening of the exhibition on Cultural Routes of the Council of Europe-17/09/2020 by François Moyse, president of the AEPJ

Madam Minister of Culture,
Madam Director General of the Council of Europe,
Mr President of the European Institute of Cultural Routes,
Mr. Director of the same Institute,
Ladies and Gentlemen,

A few days ago, on Sunday 6 September, the European Day of Jewish Culture took place as it has for the past 20 years. This sentence seems banal to the connoisseurs of our association, the AEPJ, since opening to the public synagogues, Jewish cemeteries, ritual baths and other places related to the practice of Judaism has become an unmissable event in the annual calendar of cultural events around heritage in Europe. And yet, with the COVID-19 pandemic, we were far from certain that this day could take place.

No doubt the attendance figures are down, as are the activities proposed this year. And yet, this day did take place across Europe, but in a reduced format, with outdoor activities in particular. Above all, for the first time we organised a day of activities ourselves and centrally via the Internet, instead of just coordinating the programmes of local partners. An entire online programme was offered for eight hours and was a small success. The digital transformation was thus accelerated by the pandemic!

These two synagogues are just two of the places on display on the panels of this exhibition, which include descriptions of Jewish heritage sites throughout the Grand Duchy, with photos and explanations of the places described, all within the historical framework of the Jewish community here in Luxembourg.

Moreover, a walking route through the centre of the capital is being completed with the support of the Ministry of Culture. This itinerary will be part of the national Jewish heritage route, which is currently being planned and whose elements shown here are often shown for the first time. This itinerary, which is currently being prepared, will be part of the European Route of Jewish Heritage, supported by our association AEPJ, which has its headquarters in Luxembourg.

Indeed, this Itinerary has been recognised by the Council of Europe since 2004 and we are working in close collaboration with the European Institute of Cultural Routes and its director, Mr Stefano Dominioni, to promote European heritage, and I would like to thank him and his team for this.
These few elements that I wanted to bring to your attention bear intrinsic witness to the importance of the European Cultural Routes in European society. We can see that the other routes also provide information on their own themes.

They are a tool for knowledge, history and exchange between the actors who run these routes and the population, as well as a very useful tool for reflection, I believe, for drawing up cultural policies for political decision-makers.

Indeed, there is no need to emphasise that the itineraries presented here, in which Luxembourg is involved by different actors, all have a multiple dimension, which arouses interest and enthusiasm. Thus the spa town of Mondorf-les Bains is a national pride. The former synagogue of this town, which is also exhibited here, is a link between the two itineraries. Other historical or heritage themes such as the industrial heritage or the fortifications speak a lot to Luxembourgers. Finally, even in social-economic themes such as Iter Vitis, a link exists with our itinerary since some kosher wine producers participate in this network.

This exhibition is an important initiative to raise awareness of the interest and importance of these routes in Europe. AEPJ is proud of its work over the last 20 years to make known a Jewish heritage which must now be considered a common good of the whole society. It bears witness to a history of integration, which has always been constant and harmonious, but a successful integration that holds many lessons.
Through the Jewish heritage, an even broader intercultural dialogue than an interreligious dimension has been created. In more than 30 countries, as far away as Azerbaijan and Georgia, we have professionals, politicians and volunteers working to safeguard, renovate and enhance this heritage. They contribute to making known a history, ours. My wish is that these actions strengthen the spirit of European citizens, through knowledge and respect for others. This is how we make the stones speak, all together.

Thank you for your attention.