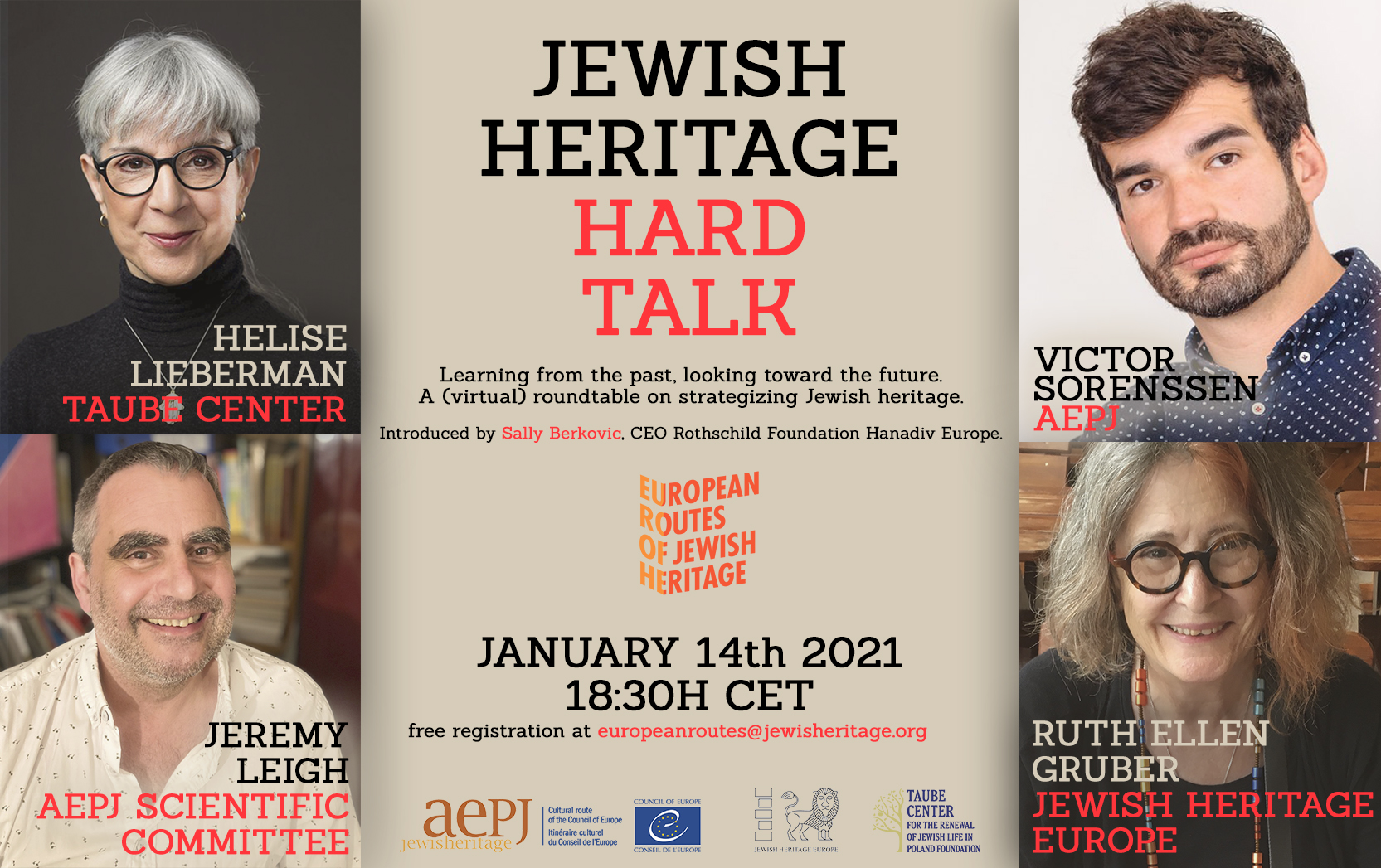 Learning from the past, looking toward the future.
A (virtual) roundtable on strategizing Jewish heritage.

Four experts in Jewish heritage work sit down (virtually) to discuss and debate the realities of Jewish monuments and heritage sites in Europe: from their destruction during and after the Holocaust to the "Jewish archaeology" of their documentation and rediscovery; to the multiple challenges and strategies for their preservation and future use: for religious purposes, education, tourism, culture, commemoration, and more.

Catalysts for the conversation are two key sets of strategic guidelines issued two decades apart. These are The 10 Commandments for Jewish Heritage set forth in 2020 by Sally Berkovic, the CEO of the Rothschild Foundation (Hanadiv) Europe, and a series of seven priority recommendations for Jewish heritage strategy drawn up at a meeting of experts in Paris in 1999. These documents, two decades apart but similar in many respects despite all that has gone on in the interim, provide a framework to look back at what has happened, assess the current situation, and look ahead.


To register for the conference for free, contact by email at europeanroutes@jewisheritage.org

Helise Lieberman is the Director of the Taube Center for the Renewal of Jewish Life in Poland Foundation. An informal educator and former Hillel director, Helise was the founding principal of the Lauder-Morasha Day School in Warsaw. She has served as a consultant to the Rothschild Foundation (Hanadiv) Europe, the American Jewish Joint Distribution Committee (JDC) Baltic region, the Westbury Group, and the POLIN Museum of the History of Polish Jews. A recipient of the Polish Ministry of Foreign Affairs Bene Merito award, Helise was appointed director of the Taube Center and its flagship program, Taube Jewish Heritage Tours, in 2009. Helise has lived and worked in Warsaw since 1994 and is a dual citizen of Poland and the United States.

Victor Sorenssen has been director of the AEPJ - European Association for the Preservation and Promotion of Jewish Culture and Heritage - since 2017. He studied Political Science at the Autonomous University of Barcelona, where he had an internship the university's Observatory of European Policies. He has served as director of the Comunidad Israelita de Barcelona and founded the Jewish Cultural platform Mozaika, where he has helped develop projects such as the Jewish Book Festival Sefer Barcelona, and the Salam-Shalom initiative.

Ruth Ellen Gruber has researched and written widely on Jewish heritage for more than three decades. The author of several books on the topic, she runs the web site jewish-heritage-europe.eu. Her honors and awards include Poland's Knight's Cross of the Order of Merit, a Guggenheim Fellowship, a grant from the U.S. National Endowment for the Humanities, and the Michael Hammer Tribute Research Award from the Hadassah Brandeis Institute (HBI). In Spring 2015 she was the Arnold Distinguished Visiting Chair in Jewish Studies at the College of Charleston (South Carolina).

Jeremy Leigh teaches Israel Studies and Modern Jewish History at Hebrew Union College-Jewish Institute of R_e_l_i_g_i_o_n_'s_ _Taube Family Campus in Jerusalem. He is the coordinator of the Richard J. Scheuer Israel Seminar for the Year-In-Israel Program as well as director of the HUC-JIR-JDC Fellowship for Global Jewish Responsibility. He leads the Year-In-Israel P_r_o_g_r_a_m_'s_ _program in Lithuania and coordinates the annual professional development program in the Former Soviet Union. Leigh studied at University College London and the Hebrew University, Jerusalem. He has written extensively about the eld of Jewish educational travel, including his last book, Jewish Journeys: Reflections on Jewish Travel (Haus, London 2006). Leigh was born in London, England and moved to Israel in 1992.

Sally Berkovic is the CEO of the Rothschild Foundation Hanadiv Europe, supporting Jewish heritage and culture across Europe. A writer and author, she blogs at the Times of Israel and is the author of the book Under My Hat: How Orthodox Women Are Shaping the Future of Judaism.